A female Presidential aspirant of the PDP has indicated her interest to go after the position of the number one man in the country, come 2019.

A U.S.-based woman, Princess Oyenike Oyedele Roberts, has declared for the presidency of Nigeria on the platform of the opposition Peoples Democratic Party (PDP) for the 2019 presidential election.

Nike Roberts, as she is called, while addressing supporters in New York, also dissociated herself from corruption, vowing never to accept any donation from corrupt Nigerians to fund her campaign.

She said her aspiration was built on five-cardinal plans: Uninterrupted power supply, quality healthcare for all, creation of one million jobs annually, quality affordable education and security of lives and property. 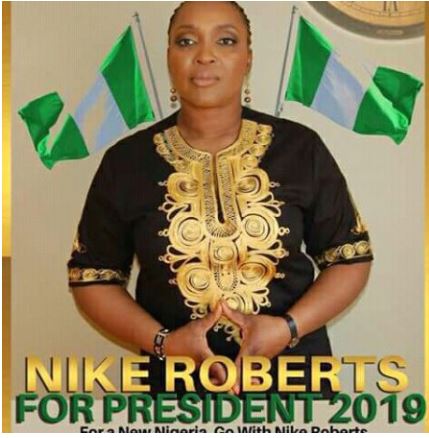 The PDP presidential aspirant, whose campaign slogan is ‘Hope 2019’, is the Vice Chair of Nigerian-American Public Affairs Committee and the President, Association of African Media Practitioners in the U.S.

She blamed the problems of Nigeria on what she termed the current faulty structure, saying the Nigerian president in the next political dispensation must have the will to restructure the country to realise its potential.

Notwithstanding the allegation of corruption levelled against PDP when it was in power, she urged Nigerians to trust her integrity as she had not been tainted by any act of corruption having not held political positions.

According to her website, www.nikeroberts.org, Nike returned to Nigeria to work in the hospitality industry by developing her own brand of lunch delivery services to corporate clients, and event catering.

She later left for the US where she attended Gwinnett Technical College in Georgia.

She then started the first multi-cultural television station in Atlanta area, which showcases the experience of Africans in Diaspora. She also produced and hosted her own talk show.

“I Can Win Imo Without You” – Uzodinma Dares Okorocha

MY BOYFRIEND MARRIED SOMEONE ELSE WHILE WE WERE STILL TOGETHER…Nigerian Lady Shares in Tears.