Keeping up with the news is hard. So hard, in fact, that we’ve decided to save you the hassle by rounding up the most significant, unusual, or just plain old mind-blowing stories this week.

Charleston Officially Apologized For Its Role In The Slave Trade

At one point, the city of Charleston, South Carolina, was one of the major focal points of the transatlantic slave trade. Around 40 percent of slaves entering the US passed through the port, and fights over history vs. heritage continue in Charleston to this day. It was in Charleston, after all, that Dylann Roof shot dead nine black church members in 2015.

This week, that bitter fight over heritage reached a turning point of sorts. On Tuesday, the city council of Charleston voted by a knife-edge 7–5 to formally apologize for their hometown’s role in the slave trade. It was both a historic about-face and a vote that met with some stiff local opposition.

That opposition came from all sides. While many didn’t want Charleston to apologize for something that happened in the distant past, others opposed the apology for not going far enough to address racial tensions today.

It looks like the dominoes are beginning to fall. After Uruguay and a number of US states recently legalized recreational weed, another nation joined their number this week. On Tuesday, senators in Canada voted overwhelmingly to legalize marijuana nationwide. From October 17 this year, all Canadians over 18 will be allowed to buy commercial pot as legally as they do alcohol.

The move is historic in a number of ways. Canada is only the second country to completely legalize weed for recreational use (many others have decriminalized it) and the first in the G-20.

As a country with historic ties to big European players like the UK and France and an extremely close cultural connection with the US, it seems likely the move will spark a wave of legalization. In London this week, former Conservative Party leader William Hague called for the UK to follow in Canada’s footsteps. (Theresa May rejected his idea.)

In short, big changes are afoot in drug legislation worldwide. It may not be too long before we’re looking back at the War on Drugs through a cloud of green smoke and wondering what the heck we were thinking.

Attorney General Jeff Sessions’s “zero tolerance” illegal immigration policy went into effect at the start of May. It wasn’t until this week, though, that it exploded. Following leaked recordings of illegal immigrant children wailing as they were separated from their parents at the US border, Washington, DC, found itself dealing with the most radioactive political fallout this side of Chernobyl.

Sessions’s approach makes border agents arrest all illegal immigrants and place them in detention. Since it is illegal to jail minors with their parents, any children are placed in temporary shelters. This does not usually occur with migrants coming into the country at legal ports of entry. There were also cases of family separations under previous administrations but not as many as under the current policy.

Unfortunately, the parents are usually given “expedited removal” and quickly sent back to their home nations, something you again can’t legally do to children. The result is that there are currently over 1,000 illegal immigrant children stuck in shelters on the US side of the border with their parents often stuck on the other side.

The backlash against Sessions’s approach started Monday, with First Lady Melania Trump also criticizing the policy on Twitter. It grew to include the Methodist Church, which threatened to expel Sessions.

By midweek, family-focused Republicans, illegal immigrant–friendly Democrats, the press, and a huge chunk of the public were in uproar. Even President Trump—no fan of illegal immigration—said he “did not like the sight of families being separated” and signed an executive order allowing immigrant families to be detained together.

However, the saga is far from over. The 1997 Flores Settlement Agreement makes it illegal to detain a child for more than 20 days, meaning the president’s executive order is merely a stopgap to cover the next two to three weeks. To prevent family separations from resuming, Congress will need to pass an immigration bill, a difficult task with midterm elections coming up.

A Shocking Report Revealed Mass Deaths At An English Hospital Dr. Jane Barton may soon be infamous. This week, a shocking report into patient care at Gosport War Memorial Hospital placed her firmly at the heart of a scandal that unfolded between 1988 and 2000. Set up in 2014 by the UK government, the official Gosport inquiry claimed this week that Dr. Barton routinely prescribed dangerously powerful opioids that led to the deaths of between 456 and 650 people.

There is no suggestion that Barton was a serial killer. However, there is plenty of suggestion that she ran a horrifically incompetent regime on her ward. She pressured patients to take unnecessary drugs to knock them out and lighten her workload and forced nurses to routinely give patients potentially lethal doses of painkillers without medical justification.

Perhaps even worse is the evidence the inquiry found of a cover-up, suggesting the NHS and local police closed ranks to protect Dr. Barton. The families of the dead are now demanding that she be prosecuted. For her part, Dr. Barton has blamed the deaths on her being overworked.

President Trump Authorized The Creation Of A New Space Force 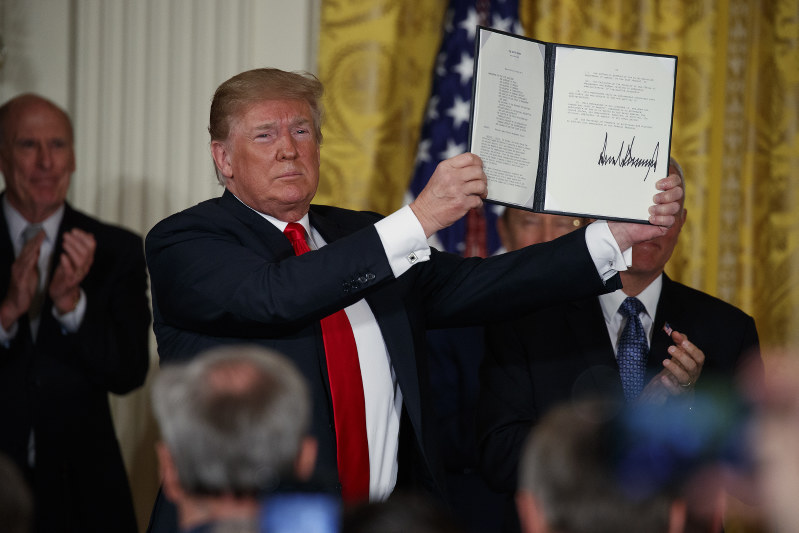 So, having gone and hit a historic first with his Kim Jong Un summit, President Trump appeared to try topping even that this week. On Monday, he announced that the US military would be expanded to include a whole new sixth branch, spun off from the Air Force. Known as the Space Force, it would aim to project US might beyond the boundaries of the atmosphere.

The idea was ridiculed in some quarters for sounding like a sci-fi movie. But, as this article in Ars Technica points out, it’s a fairly sound plan. The Air Force already has a department focused on space, and protecting US satellites against potential threats from China’s new space program is something Congress has been taking seriously for years.

Unlike in many areas, though, changing the structure of the military isn’t something the president can do by executive decree. Congress would need to authorize the creation of the Space Force, and it’s not clear if there’s any appetite to do so at the moment.