Former Cambodian Prime Minister has been seriously injured Sunday in a road crash that killed his wife and injured at least seven other people, officials said.

The former Cambodian prime minister has been seriously injured in a car crash which killed his wife and injured at least seven others on Sunday.

Officials said Prince Norodom Ranariddh was in a convoy with other senior figures of his FUNCINPEC party and was heading towards the seaside town of Sihanoukville in southwestern Cambodia.

The SUV the 74-year-old politician was travelling in collided with a taxi travelling in the opposite direction, according to a senior party member in the group. 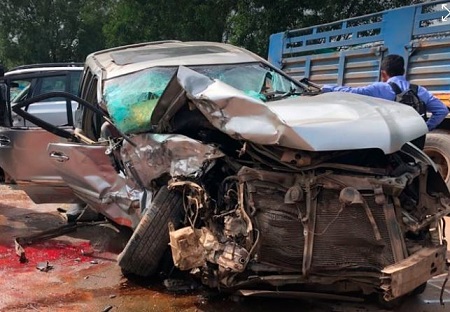 The deadly crash comes ahead of the country’s general election next month, in which the former prime minister and his wife were running as candidates.

The prince – a son of the late King Norodom Sihanouk – was Cambodia’s co-prime minister for four years in an uneasy power-sharing deal with the current leader Hun Sen after his party won a United Nations-organised election in 1993.

His royal background made him popular despite having a strained relationship with his father.

Prince Ranariddh was ousted in 1997 and fled abroad as tensions between him and Mr Sen boiled over and led to two days of clashes in the capital between supporters of the two leaders.